The Galápagos Islands – an arena of conflicts in the equatorial paradise

The Galápagos Archipelago, consisting of 19 islands and smaller groups of rocks in the Pacific Ocean, is characterised by its natural uniqueness. The area known as Archipiélago de Colón, the Archipelago of Columbus or Galápagos, belongs politically to Ecuador. According to Atlas de Galapagos (2018), around 80% of birds and 97% of reptiles and terrestrial mammals in this equatorial paradise are endemic species, that is organisms native only to this region. The Galápagos is home to i.a. Galápagos tortoises, marine and land iguanas, and Galápagos penguins. 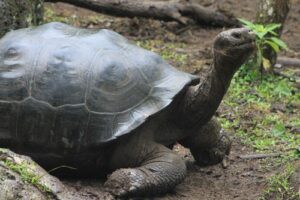 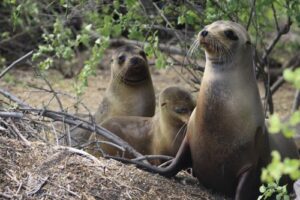 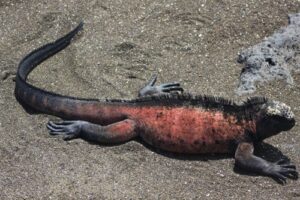 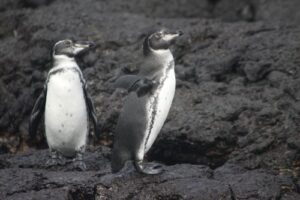 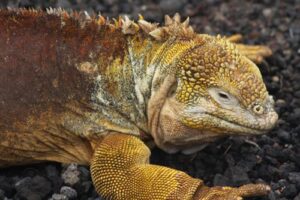 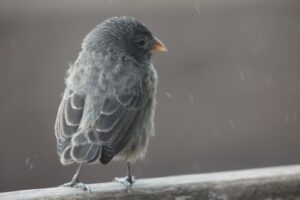 The needs of the natural environment, the local community and visitors often differ and therefore the Galápagos Islands has become an arena of conflicts in the equatorial paradise. Can sustainable development counteract divisions and serve to work out a compromise?

Demographic pressure consisting in short-term scientific reasearch visits, typical tourist stays and arrivals in order to settle there permanently makes the islands an arena of conflicts. Ever since the discovery of the Galápagos in 1535, the increasing demographic pressure has been reflecting the growing interest in the Islands.

Situated about 1000 km west of the South American coast, the islands were for several centuries more attractive as a stopping point during expeditions than as a place for permanent residence. They were occasionally visited by sailors, pirates and whale hunters. Were these stays, due to their short terms, neutral to local wildlife? Unfortunately, the remaining reports unanimously prove their destructive impact. Passers-by would replenish their supplies by taking aboard among the other things tortoises which constituted valuable food. At the same time, pests, such as rats, would come from ships to the land and disturb the biological equilibrium of the islands. Endemic species contributed to the extinction of the representatives of local fauna and consequently to the decrease of biodiversity. 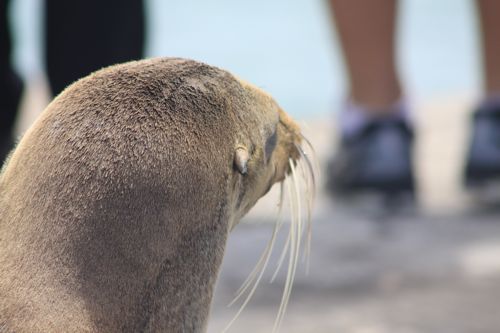 It was not until the 20th century, that – along with the development of the air transport – the Galápagos Islands began to attract masses. Scientific research (2020) shows that demographic pressure is rising. In 1950 only 1,346 people lived on the Galápagos whereas in 1990 there were already almost 10 thousand (9,785). In the 1990s the archipelago’s population would rise by about 6% annually, while in the continental part of Ecuador only by 2%. In 2015, 25,244 people lived on the Galápagos, and in 2020 – already 27,100. The Galápagos enjoy the reputation of an attractive place to live, mostly due to numerous work places in tourism.

The answer to the growing demographic pressure and the threat to the natural uniqueness of the islands is to set out the rules for different interest groups in the arena of conflicts. It is sustainable society, where the conservation of wildlife in this equatorial paradise is an overriding concern, that can guarantee the preservation of the well-being of its residents.

Only 15% of its population work in agriculture, cultivating fruit (mainly bananas) and vegetables, and raising cattle. Before the protection area was extended and the Galápagos Marine Reserve was founded in 1998, fishing had been an important activity for locals. A boom for sea cucumbers used in Chinese medicine and in Asian cuisine played a particular role here. After the reserve had been established, catch limits were set and only local fishermen were entitled to fish there. Unfortunately, the demand for fish and seafood has resulted in the rise of illegal practices (Dudek & Wites, 2015).

The Galápagos community works in tourism, which generates 60% of its income (2019). Galapagueños serve tourists in hotels, restarants, souvenir shops and work as travel guides in diving centres and tourist agencies.

Responsible tourism consists in the smallest possible interference in regions visited. How to balance increasing the income with preserving the uniqueness of the equatorial paradise in the Galápagos? Is responsible tourism a key to reconcile the interests of man and Nature?

The Stanford Graduate School of Education in the United States has prepared a canon of responsible behaviours at the stages of preparing, visiting, and returning from the Galápagos Islands. Their suggestions are addressed not only to those planning their stay in the Galápagos, but also to everyone who wants to adhere to the rules of resposible travelling. Despite growing mobility, many of us, unfortunately, forget about this. As you review the presentation, reflect on how the suggested behaviours relating to a stay in the Galápagos Islands apply to other familiar tourist places.

Apart from the costs of transportation, board, and accommodation, every visitor to the Galápagos is obliged to pay administrative fees. In 2020 these were two amounts totalling $110 USD. In order to go to Isabela island, some additional fees were required. In pre-covid reality there were twice plans to raise entry fees which should have resulted in budget benefits and limitation of tourist traffic. Is the level of the entry fee actually an effective solution to regulate the number of visitors? Maccu Picchcu in Peru does not confirm a correlation between an increase in ticket prices and a decrease in the number of visitors.

Education and sustainable development influence each other. It is education that decides how sustainable development is perceived and implemented, and the degree of sustainability impacts the quality of education. It should be taught that the unique Galápagos wildlife is endangered by growing demographic pressure and the desire to multiply the benefits from tourist traffic management.

The assessment of global actions aimed at protecting the Galápagos Islands is positive. Unfortunately, the local education system, an important component of promoting the idea of sustainability, has not developed leadership skills among the locals. It is education which shapes the civil society involved in nature conservation and suggests solutions for economic development that guarantees well-being. 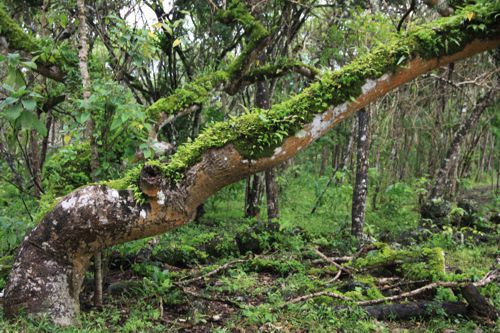 The Tomás de Berlanga School on the Galápagos, offering bilingual education based on critical thinking and carries out the projects supervised by the Scalesia Foundation. Its name comes from the endemic shrubs and trees from the family Asteraceae, called ‘Darwin’s finches of the plant world’. The foundation educates by stressing that living in a natural heritage area obliges residents to apply the rules of sustainable development. Changes in the curriculum, professional development and recruitment of teachers, as well as in school administration have been introduced, and the scholarship programme developed. Over 60% of students receive financial support for education and thus it is available for everyone, regardless of their income.

Demographic pressure, before the outbreak of COVID-19, mirrored the popularity of the islands as a place to live among Ecuadorians. The actions undertaken then served to limit the surge of people from the continent. The problem was caused by illegal visitors without the regulated status of an inhabitant or resident.

Paulo Proano, the Ecuadorian Minister of the Environment and Water commented on the reserach conducted in September 2020 by the national park employees and the volunteers of Charles Darwin Foundation. The list of animals shows good health condition in the bird population in the archipelago. The Galápagos penguin population in the islands grew from 1451 individuals in 2019 to 1940 in 2020. In the national park’s statement we can read that the number of penguins is the highest since 2006. Similar results were obtained for cormorants, endemic flightless birds which can dive. The list showed a rise in their number from 1914 in 2019 to 2220 individuals in 2020.

It cannot be unequivocally stated that the increase in bird population results only from the pandemic which has limited the arrivals in the Galápagos. Despite the fact that the national park, officially closed in March 2020, was re-opened on 1 July 2020, tourist traffic is considerably lower. The studies’ participants underline that the activity of the climatic event La Niña also helps providing birds with larger amounts of food and thus contributes to the increase in their population. However, the COVID-19 pandemic has undoubtedly limited the disturbances of breeding sites.

International support measures focus on a long-term perspective. Meanwhile, the direct needs of the inhabitants are not satisfied. Education, a key to the development of young ambassadors for the Galápagos protection, is particularly in danger. Until the outbreak of the COVID-19 pandemic many parents of the children attending the Tomás de Berlanga School worked in tourism – as travel guides, ship workers, drivers – and paid the fee. Now they are increasingly unable to afford it. One should also remember that the loss or limitation of the livelihood leads not only to the decrease in the standard of life, but also to a less sustainable use of the environmental resources. If the school closed its door, it would mean the end of its 30-year-long activity.

The Scalesia Foundation is working on new financing models and organizing aid on an interim basis. The financial lifebelt received from the world serves to purchase books, laboratory equipment or computer software. Sponsors receive regular reports on their recipients’ progress and they can meet supported students on their arrival in the Galápagos. It is also possible to symbolically adopt an endemic cactus which can be planted if you ever reach the islands. These effors aim at preserving the continuity in education of new generations of Galapagueños. Their retention on the islands has a crucial significance for a sustainable future for the archipelago. 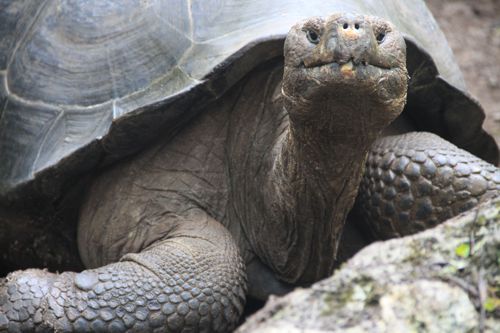 Let us make good use of the wisdom resulting from the observation of wildlife and its reaction to a temporarily reduced tourist traffic. The research conducted on the Galápagos during the enforced isolation of the islands due to the worldwide COVID-19 pandemic gives plenty of reasons for rational decisions on the arena of conflicts in this equatorial paradise. May the experience of the pandemic help to rationally shape the sustainable development of the islands in the future. Regardless of the possible scenario, may the natural uniqueness of this region be preserved.

Tomasz Wites – geographer, habilitated doctor and head of the Chair of Regional and Political Geography at the Faculty of Geography and Regional Studies at the University of Warsaw. The vice-president of the Polish Geographical Society. An enthusiast of long and short journeys.

Data used in this essay come i.a. from field studies carried out on the Galápagos in September 2014, conducted under the agreement (BI/151/08), concluded in Puerto Ayora in 2008 by and between the Director of the Galápagos National Park, Sixto Naranjo and the Rector of the University of Warsaw, professor Katarzyna Chałasińska-Macukow.